In 2018, under the patronage of Paralelní Polis and the Institute of Cryptoanarchy, the second edition of silver commemorative coins was struck, this time with the motif of Julian Assange, the co-founder of WikiLeaks server. It is the continuation of the successful project of our team, headed by Roman Týc, started off with the Ross Ulbricht 2017 collection the previous year. Thanks to the great demand from collectors and Paralelní Polis supporters, the first edition was almost immediately gone. Paralelní Polis currently holds only no.1 and no.100. The remaining Ulbrichts can be obtained only from the secondary market.

→ More about the project and the Ross Ulbricht 2017 edition

Julian Assange is the motif of the second edition of coins. He is an Australian hacker, the co-founder and editor of the international non-profit organization and server, Wikileaks. Between the years 2008 and 2014, he received many awards for his work, UK Media Awards awarded each year by Amnesty International being one of the most prestigious.

Assange has been granted political asylum by the Embassy of Ecuador in London for six years. In February 2016, the UN Commission on Human Rights found that Assange was in the UK under arbitrary detention and in conflict with the international law. According to the latest statements from the Ecuador Embassy, however, he is likely to be handed over to the police. He faces charges for breach of bail in the UK, while in the US, he could be charged with espionage and treason for the publishing of classified documents on WikiLeaks and even sentenced to death. As a fighter for digital freedom, he is being restricted of his personal freedom and ultimately in danger of his life.

At this year’s HCPP18, the second edition of silver coins with Julian Assange was unveiled. The visitors also had the opportunity to meet the author of the design, Štěpán Beránek.

The first fifty pieces are made in high gloss – proof version, coins no.51 to no.100 in patina – in matte version. Thanks to the BitNotes technology, each coin is backed by one hundredth of a Bitcoin, just like in the first edition. The only difference is that this time we were able to put the complete public key — a fifty-two-symbol cryptographic code — on the edge of the coin with laser. Last year it had to be separated into two parts as it was hand-engraved which made it impossible to put the whole code on the coin. The second part of the code was provided at the accompanying certificate. 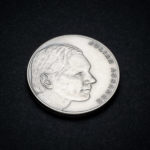 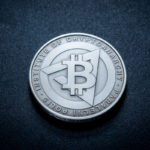 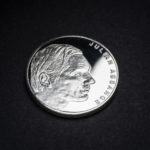 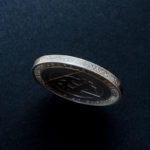 The third edition of coins 2019 with the motif of Aaron Swartz will be issued this October. Due to the collector’s high demand for the previous editions we recommend making a reservation. Currently, there is still a few pieces with Julian Assange left. If you are interested in buying the coin or making a reservation, please contact minceparalelnipolis@gmail.com.